Apparently I’ve had enough birthdays on this planet to turn 40 next year. I’ve heard of people creating a list of things to do as a way to celebrate and embrace this moment. I’ve got a lot of little things like that on the brain, so I figured I’d give it a go.

JUNE 2 – Kim’s family has been loyal to a drive-in called Maddox since the beginning of time. Down the road, however, there’s another option I’ve always been intrigued by. I figured my birthday was the perfect time to be a rebel. Pretty dang tasty!

JUNE 4 – Before the pandemic started I’d gone bowling on my birthday for nearly 15 years; a tradition that eventually grew in size as my family did. Getting this tradition rolling again was something I had pretty high on my list. Glad I did, super fun to have this tradition back on the calendar.

JUNE 10 – Kim and I played a lot of ultimate frisbee in college. Tuesday and Thursday evenings on the quad, watching the sun set, tossing discs with out friends…hard to beat. When a professional ultimate team came to Utah and one of those college friends we used to play with wanted us to come with him? How could we say no?

JUNE 16 – For whatever reason, tongue has always been one of those meats I’ve given a wide berth to. But when I was grabbing some tacos with an old friend for lunch and saw tongue on the menu? Welp, I figured it was as good a time as any try. And, whadya know, it was delicious! (It’s the grayish meat on the left.)

AUGUST 12 – Sardine Peak has some sweet views and a descent that I’ve never seen in person (we got close to making the whole loop on a hike one day, but didn’t finish it). So, now that I have a mountain bike, I bagged it. Super fun downhill. Would highly recommend.

AUG 19 – Ben Lomond has been on the list for years, so Kim and I (with the help of certain grandparents who babysat our offspring) finally put it on the calendar. Just over 3,700 of climbing and 9.85 miles in around 5.5 hours. We may not be as young as we used to be, but we can still crank out the miles!

AUG 26 – I’ve looked down into Red Canyon dozens of times and dreamed of paddling through in a kayak and seeing my happy place from a new perspective. But at 16 miles, it’s a haul. So I spent a bit of time on the water training this summer, picked a day, and made it happen. One of the most magical experiences of my life.

AUG 26 – I’ve wanted to eat at the restaurant in the lodge for as long as Blanchards have been making the trek (about 30 years). What better time to cross this off the list than celebrating my paddle through Red Canyon. And what better meal than a delicious chicken fried steak.

AUG 31 – It’d been a few years since we’d made it to a game in person and I wanted to be sure we made it back. Even more, RSL scored two goals in the first half and we were treated to a classic Rio Tinto Stadium sunset to boot (plus the obligatory trip to Crown Burger before kickoff).

#10 Paddle to See the Salmon at Causey

SEP 16 – When I noticed that Inntopia’s user group schedule overlapped with the Green Mountain Championship just down the road, I knew it would be a perfect way to chill after a busy week putting on the conference. A crisp Vermont day didn’t hurt either.

OCT 1 – On our fall road trip we actually passed through two new national parks – Black Canyon of the Gunnison and Great Sand Dunes – but the latter completely caught me off guard with their sheer size. Add in the colors and shape and contrast between the surrounding mountains? Totally amazing.

OCT 6 – We’ve talked about going to the Grand Canyons for a long, long time. So we planned our fall road trip to include both the north and south rims. It was a bit of driving, but absolutely worth it. To see that much of earth’s history opened in front of you is awe-inspiring.

OCT 15 – I’d ridden part before and knew it’d be a fun descent, so Kim was nice enough to drop me off at North Ogden Divide and I spent the next couple hours cruising along the ridge between Ogden City and Ogden Valley. The views were incredible, the leaves were lovely, and the old legs had just enough in the tank to get me back home.

OCT 21 – We’d hiked a mile or so back in to Middle Fork, but with a certain two-wheeled machine at my disposal I tried to get further back into the canyon. Made it about four, rocky miles but had a glorious time and had an awesome time. Will definitely try to go further some day.

OCT 22 – I said it was top secret, what are you expecting some hints down here? Sheesh. But since this top secret mission has been completed I figured I should add something. And that something is this paragraph that tells you absolutely nothing about what it is. :)

NOV 11 – I’d been trying to get an ace all year, but after a couple near aces at Harrisville Park I realized a short, easy course like this was by best shot. So I repeated the 5th hole – flat, open, 110′ long – on repeat to see if I could make it happen. A half hour later my Star Mamba rattled the chains!

NOV 12 – Every time we drive over the divide in the evening we see folks pulled over enjoying the view and sunset. So, when the timing aligned on our way home from Logan we gave it a whirl. It was completely glorious, thanks in part to a tasty round of Wienerschnitzel dogs and burgers we picked up on the way.

#19 Go to Services at a Different Church

NOV 20 – Kim’s mom plays in the bell choir at the First Presbyterian Church in Logan every third Sunday, so we changed up our Sunday routine to see her in action. The service was really nice and it was really insightful and refreshing to see worship, spirituality, and prayer from a fresh perspective.

NOV 24 – Sam and I had done a little bit of running over the summer, so when we saw a sign for a Thanksgiving 5k we decided to give it a go. A couple weeks of training later we crossed the finish line with arms raised. Super fun.

DEC 17 – I used to write poems but…well…I just haven’t for a while. Even though I can’t do as much physically that I could at 25 or even 35, I love the fresh perspective on life and love and my fellow humans that has come as I’ve let go of some old ideas and embraced new ones. Keeping this one private for now, though, until the world is ready for my poetic prowess ;)

DEC 29 – This had been on the list for quite a while, so we made it one of the kids’ Christmas gifts to open together. We had a sunny day today and slightly warmer temps, so we rolled up our sleeves, built a little seat, strung the cable, and tweaked until it was working like a champ.

#23 Go to an Aggie Basketball Game

DEC 31 – I have a ton of great memories of evenings in The Spectrum cheering on my Ags. Like some of the other things on my list, it had been a few years and putting this on my list was a good way to make sure it happened. Super fun time with the fam.

#24 Ski Every Run at Nordic Valley

JAN 20 – Initially this was going to be every run sometime this season, but where’s the fun in that? Decided to crank ’em all out in a single day. Legs are tired but the weather was amazing and I had a completely glorious time exploring some new terrain.

#25 Make Balaclavas for the Kids

JAN 29 – For a long time (too long) we’ve talked about making a balaclava out of t-shirts for Cal to wear under her helmet when she skis. After rummaging through Kim’s t-shirt collection, we found some nice fabric, pinned, sewed, and even decided to make one for Sam too. Not exactly professional, but not too shabby either!

FEB 4 – I’d seen it a million times, but just never made the trip. So, after attending a funeral in Utah County, we did. It was really interesting to learn about the origins of Hare Krishna and the history of Hinduism. Plus the buffet was super tasty. Cool place.

More updates from my 40-before-40 journal: 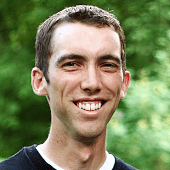 I'm a SaaS marketer and maker.

Never heard of me? All good, these days I don't chase influence as much as I do balance. By day I run marketing for Inntopia and evenings see me building SendView or tinkering on games, but my happy place is playing in the mountains with my family.

My side-hustle that lets you track any company's email marketing strategy.
Check it Out →
Follow my weekly side-hustle journal →

My day job that lets resorts and hotels supercharge their ecommerce and CRM efforts.
Check it Out → Follow my weekly day-job journal →

Hemlock
Visualize your competitor's content calendar. Readership
Discover the websites your audience engages with. Snapshot
One weekly report, all your social media profiles.